Tips and Tricks – How to Make Whitewall Tires

The tires in my home page photo are using Porta-walls.
I haven’t come across a whitewall tire anywhere in the States in the 135×15 or 145×15 size.
135s used to be popular as front tires on VW bugs, so it’s a possibility they can still be found.

I was buying my Porta-walls from a tire company in Long Beach, CA:
Lucas Automotive
tel: 800 952-4333.
About a year ago, I did some research for an alternative after Lucas ran out of stock and was waiting for a new shipment (they apparently come from Pakistan and Lucas was the only source in the US that I could find that sold them).

I looked into an idea posted in a couple automotive discussion groups:
A paint that would work well on the rubber to simulate the look of true whitewall tires. 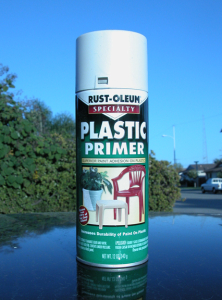 It apparently has very high adhesion properties, which makes sense if you think about how paint needs to stick to weather that glossy white molded furniture.
I ended up trying Rust-oleum’s version of it (I could not find the Krylon version locally), but to avoid the shiny look of gloss, I only used the white primer for more of a matte finish. It also had higher adhesion properties than their final coat paint.
Footnote: my tires have never had Armorall or any tire dressing on them, so I would think that you’d want the tire’s surface as clean as possible before painting. I also kept my tires on the rim when I did this. Only took about 5 hours to complete all 5 (one spare) tires.

The steps I took:

2) Hopefully, your tires have a marked outer circle line molded into the tire. My French tires did. And my Portawalls came right up to that line. If you don’t have a marking to work with, you’ll have to make a compass and get it as accurate as possible.

3) Tear small strips of wide masking tape (not painters tape- you need the sticky stuff) and overlay them very tightly along the tire’s whitewall edge so you get as smooth an arc as possible. I found this method far superior to trying to either use a liquid frisket or to try and cut a radius in the tape. The process actually goes quite fast, and you can burnish down the tape as you go. Then mask off your rim.

4) A few coats of the primer should do the trick. I would get two cans. In my test, I wish I’d applied the third coat a bit heavier.
The results? Nearly a year after doing this, my tires look great. I had a few tiny areas lift immediately within a couple days of driving around, but none after that. I attribute this to not have cleaned the tire thoroughly enough- I’m thinking that I should have taken a light wirebrushing to the areas painted).

I do not drive my car much, but still, the paint has weathered quite well. It has barely shown any discoloration (though not as bright white as the day they were painted), unlike Porta-walls, which need to be changed frequently (the outer edges yellow heavily) if you drive your car a lot. There is some minor fine-cracking closer to the rim, but not enough to warrant a re-spray just yet. 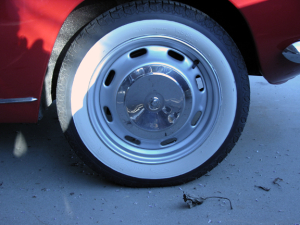 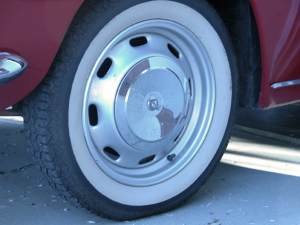 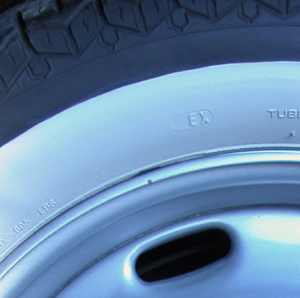 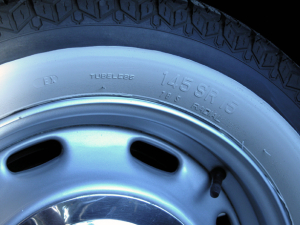