The History and Development of the Renault Caravelle

Louis Renault built his first automobile in 1898 at the age of 21 and demonstrated it to a group of friends when he attended a Christmas Eve party (Figure 1). The automobile so impressed these friends that he left the party with orders for 12 replicas. In order to efficiently produce those orders, Louis formed a partnership with Renault Frères, a company previously founded by his older brothers, Marcel and Fernand, and their automotive company was born. 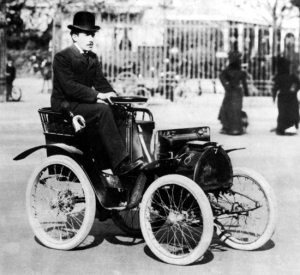 Marcel was the managing director; Fernand controlled the finances; and Louis was in charge of manufacturing. One hundred seventy nine cars were sold in 1899. By 1903, Renault Frères was producing over 3,000 automobiles annually and employed about 600 people.That same year, 1903, Marcel was killed while participating in a Paris to Madrid automobile race. Louis purchased his late brother’s shares in the company from Marcel’s mistress. Five years later, when Fernand was forced to retire from the business due to illness, Louis bought Fernand’s shares as well and became the sole owner of Renault. Under his autocratic hand, Renault Frères quickly became the largest automobile manufacturer in France. Business flourished and the Renault empire increased.

Louis was no politician and loyal only to Renault. Everything he did, he did in order to build up his company. Consequently, during World War II when the Germans occupied France, Louis was faced with a no win choice: 1) Cooperate with the Germans in order to prevent his factory and equipment from being deported to Germany. This would potentially cause him to be accused of collaboration with the enemy; or 2) Refuse to cooperate with the Germans and lose everything when his factory and equipment were sent to Germany. In order to save Renault he chose the former and co-managed the company with his German overseers. When Germany was defeated by the Allies, Louis Renault lost everything anyway. The French viewed him as aiding the enemy during the German occupation. This led to his arrest and incarceration.

In spite of the French accusation, Louis was not a willing collaborator. He wanted to manufacture cars. When Germany ordered Renault to cease automobile production and only make trucks for the German war effort, he allowed sabotage and strikes to delay the German production orders. Work was accomplished only after those lengthy delays and then with high raw material losses. Louis played for time believing that eventually France, Germany, and Great Britain would agree on a peace treaty which would allow him to return to the business of making automobiles.

During the German occupation, Louis ultimately became so demoralized over not being allowed to run his business as he wished that he ceased his long-time habit of patrolling his factories. Instead he locked himself in his office, reportedly doing nothing. In actuality he was defying the German prohibition on the development of a new automobile. With the assistance of Fernand Picard he secretly designed and built a prototype of the 4 CV, a cheap-to-produce and economical-to-run small car in anticipation of the post-war years. Louis believed that there would be a significant demand for an economical automobile during the recovery years when people had little money to purchase and operate larger cars.

Louis Renault was right about the 4 CV, but did not live to see his small car produced. The R.A.F. bombed his factories leaving over 80% of them in ruins. With the Allied liberation of France, Louis was imprisoned in September of 1944 on charges of collaboration with the enemy and died there under mysterious circumstances on October 24, 1944. The French government took over his factories and appointed a lawyer, Pierre Lefaucheux, as the administrator. On January 16, 1945, the company was nationalized under the name Regi Nationale des Usines Renault (RNUR) incorporating all of the worldwide business assets of Renault. The French government represented that the company was free to act as a non-governmental entity even though it was now owned by the government.

Lefaucheux was a Renault enthusiast who had a vision for the company he was appointed to run. While the factories were being reconstructed, he tested Louis’ 4 CV prototype at his Herqueville estate. In the midst of severe criticism and government opposition, Lefaucheux decided to build the car. It was shown to the press in September 1946 and officially launched a year later. The “Flea”, as it was called, attained sales targets of 300 cars a day by 1949 and increased to 500 cars a day by 1954.

By the late 1940’s, Lefaucheux was already thinking about a successor automobile to the 4 CV. In 1950, Lefaucheux announced the commencement of Project 109 and asked Renault’s director of styling, Robert Barthoud, to do a few preliminary sketches. Lefaucheux did not like the original in-house design of Project 109 and approached Carrozzeria Ghia, S.p.A. to redesign the car. Ghia had been formed by Giacinto Ghia in 1915 and had become a well known and respected Italian coachbuilder. During the period between the two World Wars, it had specialized in producing bodies for Italian racing cars that were renowned for their speed and elegance. Based on innovative approaches developed in the 1930’s, Ghia had easily adapted to the changing circumstances in the automobile industry which followed after the Second World War. Consequently, Ghia was able to apply those skills to Lefaucheux’s Project 109, even though the car was to be a mass produced automobile. The result was the Renault Dauphine with the first prototype being built in 1952.

Unfortunately Lefaucheux, like his predecessor Louis Renault, did not live to see his pet project marketed. In February 1955, Pierre Lefaucheux was killed in an automobile accident when the car he was driving hit black ice and left the road. His briefcase, which was lying loose in the rear seat, hit his neck and the blow killed him.
The French government appointed Pierre Dryfus to succeed Lefaucheux. Dreyfus completed Project 109 and launched the Dauphine in late 1955. Mechanically and in terms of suspension, it was a grown-up 4 CV. The 4 cylinder, 845 cc Ventoux engine produced 30 horsepower (SAE) at 4500 RPM. It transferred power to the transaxle through a 4 speed gear box. Cooling came from a radiator located at the firewall in front of the motor just behind the rear seat. The required cool air was drawn in via side vents located in front of the rear wheels. The car had an independent front suspension with coil springs. The transaxle was mounted to telescopic springs in the rear. The car, with its Italian designed body, was an immediate success, leaping quickly to the top of its market segment even though the “Flea” continued to be produced until July 6, 1961.

In 1956, a year after his appointment as the managing director of Renault, Pierre Dryfus embarked on a fact finding mission to the United States. Fernand Picard, the former assistant to Louis Renault and now Renault’s director of research, accompanied him. Dryfus wanted to increase Renault’s market share in the States, but he realized that it would probably require specially designed cars that would appeal to American tastes. As Renault’s director of research, it was logical for Picard to accompany him on the trip as the two men tried to ascertain first-hand what the “American” car shou